D&D Icons of the Realms for Waterdeep 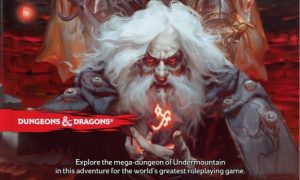 The miniatures in the set are being produced under license from Wizards of the Coast, and are designed to work well with the second volume of Wizard’s up-coming pair of sourcebook adventures set in the fantasy city of Waterdeep (see “WotC Reveals Two New ‘D&D Waterdeep’ Volumes”).

The complete set, which has a total of 44 different figures, features monsters and characters from the book, including the Elf Cleric of the Grave, the Death Tyrant, the Flumph, the Froghemoth, and even the Mad Mage himself, Halaster Blackcloak.

A limited number of Halaster’s Lab Premium Sets will also be produced.  The Halaster’s Lab set comes with a variety of scenery pieces meant to recreate the lab in the book, including the infamous relics known as the Eye and Hand of Vecna, 3 Preserved Corpses, 2 Book Shelves, 4 Large Standing Candles, a Ghost Lantern, a Summoning Circle, 4 tables, and a Giant Hour Glass, along with other items.  MSRP is $49.99.